Within this page I plan to show how our CCPS design came to be so that others might learn from this experience.  A good portion of the work done on this project was also done by Sean Taylor.

Our Goals:  The original idea was "wouldn't it be cool to replace a pole pig with a little 50lb inverter/transformer power supply?".  Of course the answer is YES!!  The plan was originally to use 2 of the largest ferrite U cores available, running at 3kva each for a 6kva power supply.  A charging voltage of 15kv sounded good enough and should be possible to make a transformer for that voltage.  This would work out to about 500-600mA RMS output from the transformer at ~11kV RMS output voltage.

Our early attempts:  The first thing we did was "try something".  We needed to get a hands-on understanding of what we were dealing with there.  From previous experience I realized that insulating 50khz AC is *not* easy.  So we wound a few coils, most of them containing 3 layers of winding of 24-26awg magnet wire, typically about 250 turns on the secondary.  Our primary winding was just 10 turns of 12 awg THHN.  We ran the transformer directly off of my basic inverter design (full-bridge of IGBTs outputting a solid square wave voltage drive).  The problem here is that transformers are almost purely inductive.  This gives a nice triangular current waveform, where of course the switching transitions occur when the current is at its maximum!  We suffered huge switching losses and blasted a handful of IGBTs before I said that we really should be using a resonant load topology to ease switching losses.  Here are some pictures from our earlier work:

The trusty H-bridge.  Notice we used quick connects for the IGBT connections.  This was what we came up with after getting sick of unsoldering the IGBTs from the board after each failure.  Now IGBT replacement is quick (and slightly less painful).

Here are 2 secondaries we wound.  Both were attempts at vacuum potting (which actually seemed to work fairly well, despite the rather thick epoxy we used).  Both coils were 3 layers of 24awg winding, about 250 turns on each coil.  Each coil should have been producing about 10kv peak, so 20kv peak for the 2 windings or about 14.1kv RMS.

Here is one of the best arcs we ever produced from this transformer.  Lots of current, but very little short circuit voltage.  Soon after this arc, the inverter dies again.  I've had it with this!  At about this time I began researching the SLR (series load resonant) topology.

These are flames left over just after an arc extinguished (yes, the arc is HOT).

The SLR topology: Nearly all of my research on this topology came from Marco Denicolai's website, extra thanks to him!  But despite his great explanation, I will continue to summarize the operation of this topology.

Basically, we employ a series capacitor with the transformer primary to resonate with the leakage inductance of the primary winding.  The resonant frequency is given by:

Now, we use what is called the "surge impedance" to determine the current that will be developed at a given voltage for an LC circuit.  Its important to note that the surge impedance only describes the current during 1 half-cycle of operation.  This topology does not allow for "resonant rise" effects, so we only concern ourselves with half-cycle increments of operation.

we find the peak current that will be present in the primary circuit.

I found that I had to add an inductor in series with my transformer, simply because the leakage inductance of the transformer was simply too low to achieve the proper balance between operating frequency and primary current.

Now, the IGBT drive timing is very crucial to proper operation of this topology.  The drive is actually running with 50% deadtime as the waveform below will show: 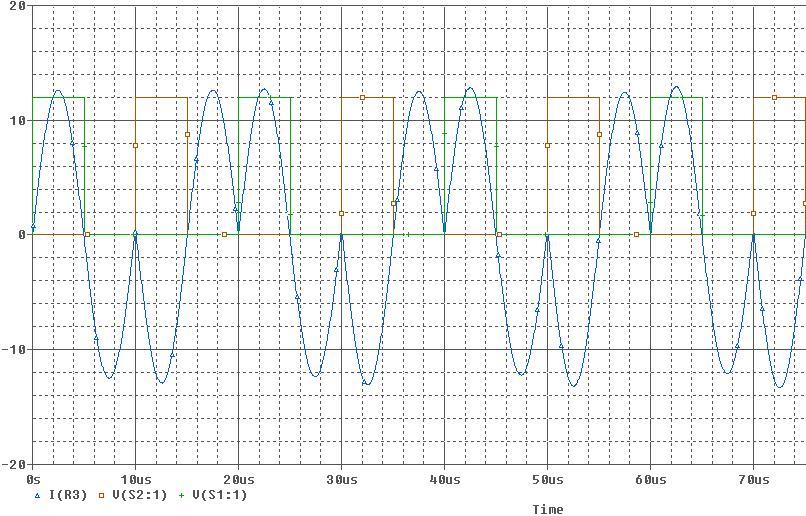 In blue is the primary current.  The green and orange are the IGBT drive signals.  Notice how the green IGBT turns on, and the current evolves as a sine wave and swings to zero (5uS) and in fact swings negatively to nearly the same amplitude.  Since the slope of a sine wave is relatively slow, there is some margin for error  for the IGBT to turn off within a specified time.  Also, the switching speed does not need to be quite so fast, because the current is near zero when switching, so switching losses are reduced considerably.  Now at 10uS the opposing set of IGBTs switch ON and *reverse the flow of current in the LC circuit*.  Again we have the same current waveform, just in the opposing direction.  One full "cycle" of operation is 20uS in length.  We can see that the drive is operating at 50khz while the primary LC is tuned to exactly twice that frequency, at 100khz.

More Recent Work: Not only did I begin to employ the SLR topology, but I redesigned the transformer itself:

Here we can almost see the primary windings.  They are inside the secondary windings near the low end of the winding (which is grounded).  The primary consists of 8 turns of 12awg THHN, this is for 400VDC full-bridge drive at 70khz inverter operation (LC is tuned to 140khz).

And of course it works!  Here it was producing nearly 700mA RMS on the secondary side!

The driver has been installed into a nice aluminum box.  This driver should be fine at 3kva, and might work as well at 6kva, but that has yet to be seen.

The transformer and LC have been hot-glued (temporarily) to the top of the box.  To the left we can see a full-wave bridge (32kV 1A) and an LC filter after that, this is used for running a tesla coil from the supply.

Here is a real waveform of the primary current, we can see that it nicely matches the predicted waveform from the simulation!

Aside from the usual IGBT failures, I had this interesting failure of the sil-pad insulation between IGBT and heatsink.  Apparently the pad was damaged when i was operating the TC, which was grounded to the heatsink and it arced to the IGBT!  But it continued to work, even with a slightly scorched pad.  But the damage caught up, and eventually it broke down with a loud buzzing sound (that was an arc between the IGBT and heatsink) until the fuse blew.  There was deep pitting in the heatsink.  Replaced the pad and its good as new.

You can see the TC base in the back with the old static gap and 9kv 60ma NST still installed (neither being used).

Some 30" sparks.  Nothing too impressive.  I believe the poor performance is due to the limited energy storage of the MMC.  The transformer was only running about 500W at this point.  Better results to come later (hopefully!).

New secondary coils, each has exactly 200 turns of 36awg.  Output voltage is around 20kVAC.